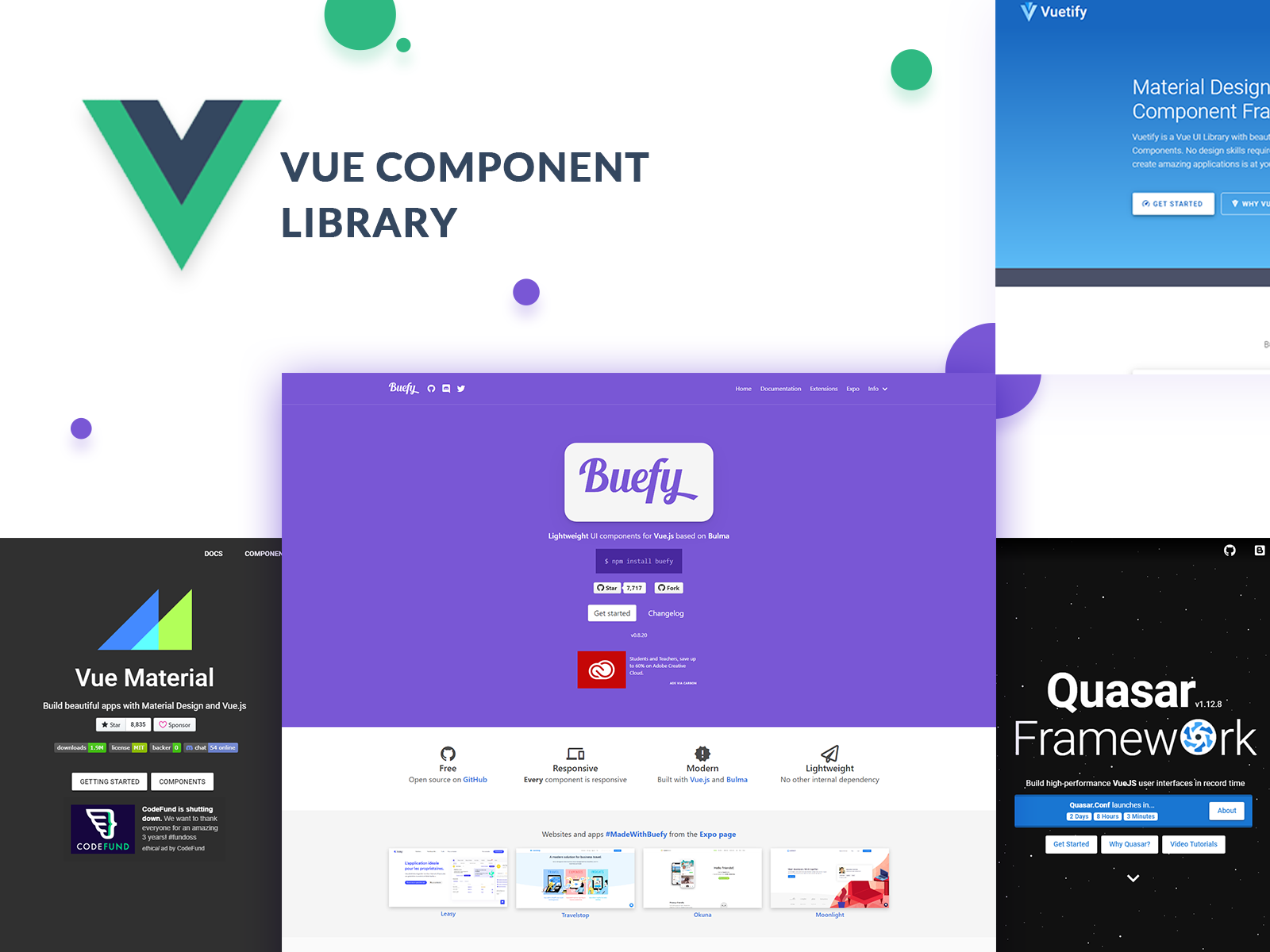 by Ankita Savaliya in Collections on July 3, 2020

Vue is a popular javascript library you can use to create dynamic applications on the front end. Every vue version is better than the previous one. It is flexible, simple, and easy to use.

In a web designing technology, vue is a competitor of Angular and React. One of the reasons vue is popular because it’s easy to use. And provides developers creating web components. Rather than style and coding button, cards the library also supports the necessary UI element for creating beautiful and components Rich application. In this article, we will discuss the fastest-growing Best Vue component libraries.

Quasar is a material 2.0 guideline base framework. It has a record-high performance in record time. It comes with 81 components which are easy to customize, extendable, and provide mobile desktop support.

Quasar has 13k star on GitHub and 101k times weekly download on npm.

Vuetify is a framework over vue which let you create clean, semantic, reusable UI components. It’s work with vue server-side rendering. It consists of UI guidelines for cards, shapes, interaction, and more. It helps you to create a professional-looking website without any designing skills.

Buefy is a lightweight UI components library based on vue and Bulma. Helps you to create a stunning app using minimal coding. Even a thorough default version has a distinct look and feel. The framework is highly customizable you can create your own brand, color, sizing, etc.

Vue material has 84k GitHub star and 12 million time npm download. It comes with 56 components to built different types of layout. It has inbuilt code splitting.

Vux is a UI library that mobile UI components based on vue and weUI. The library also supported web pack + Vue-loader +vux workflow. Vux primarily emphasizes on quick development of mobile components for your application.

Mint UI is a library of mobile UI elements based on vue that allows you to mobile like application using familiar front end code. It is very lightweight, as it weighs roughly 30KB when loaded with a production setting. It is a great choice for creating mobile applications with an ios looks and feel.

Element UI is a vueUI component library with a large community. It’s not only for front end developers but also provides a full UI kit that designers and product managers can work with. Its components are not responsive and it’s the main use for creating a desktop app. Element UI has an active strong community behind it.

VuePress is a static site generator based on vue. This framework user web packs to create pre-rendered static HTML pages, which makes processing considerably fast. It is easy to integrate into your existing application.

Vuesax includes beautiful and well-designed components that you can use your own project. The aim of this framework offers development experience where you can style the components based on the branding requirements without losing the speed of creation and production.

Looking for Alternative of Angular an...