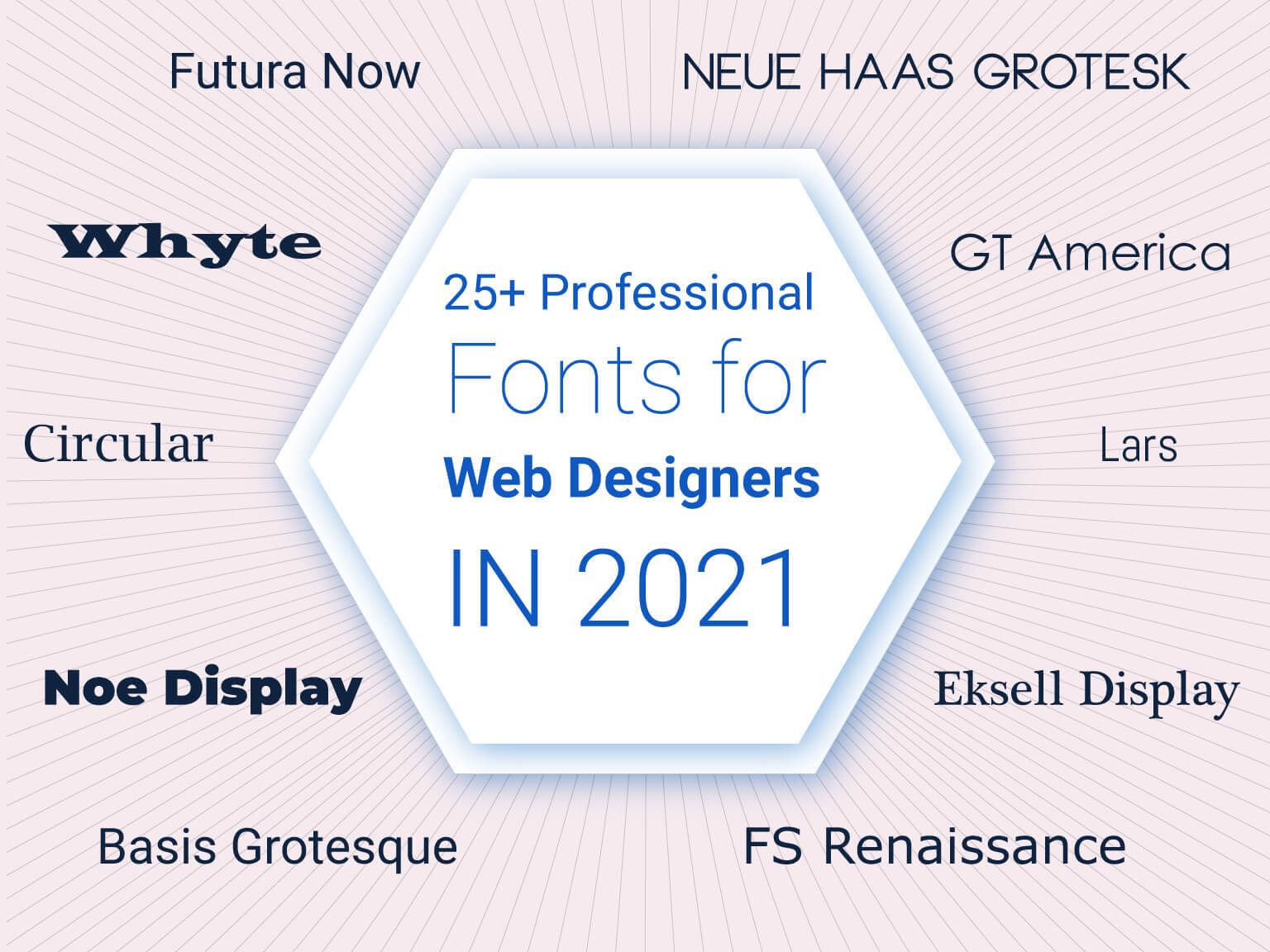 25+ Professional fonts for Web Designers in 2021

by Ankita Savaliya in Collections on April 20, 2021

There are over 650,000 different fonts available online. Fonts that are supported by the majority of web browsers and operating systems are considered to be web-safe. The operating system automatically includes the font files, so visitors don’t have to download fonts from your servers.

In this year the resurgence of classic fonts, most notably Futura Now and Helvetica. Now, the graphic design of everything from websites and album covers, book jackets to poster designs.

In this article we have discovered 25 awesome fonts for Web Designers for making your application more attractive:

Futura Now is the definitive version of Futura, the classic sans-serif that defined modern typography. It is created by Monotype and containing 102 styles. it’s also now available as a variable font, delivering limitless styles in a tidy digital footprint.

FS Renaissance is a display stencil font, but not a traditional stencil design. it is a result of A unique collaboration between lettering artist and designer Craig Black and creative director Pedro Arilla. The cuts are not rigid, but interactions that are hand-crafted between each element, emphasizing the concept of a typeface as a piece of art or sculpture.

Neue Haas Grotesk is a modern interpretation of the classic typeface designed in 1957-1961 by Max Miedinger, with art direction by Eduard Hoffmann. That eventually evolved into Helvetica, but Schwartz believes that the digitising of Helvetica involved too many compromises. The new version is designed to capture to be more faithful to the original. The best part is it is free.

Circular is a sans-serif font designed by Laurenz Brunner and released through Lineto. While broadly geometric, it benefits from some quirky elements that make it more attractive and distinctive.

A revival of the sans-serif ABC Whyte by Fabian Harb, this new version by Dinamo has smooth and sharp transitions and comes in 10 weights with corresponding italics. Most excitingly, Whyte is a variable font; an innovative and useful technology. It is supported by InDesign.

GT America is essentially the missing bridge between 19th century American Gothics and 20th-century European neo-grotesk typefaces. Available in 84 styles, it brings together the best design features from both traditions, in the widths and weights where they function most optimally.

Noe Display is a display typeface with sparkle and bite. What makes it unique is the audacious way its strokes end; large, wedge-shaped serifs come to a sharp point, and arches are capped with prominent triangular beaks. This font’s four weights have a nearly constant hairline weight, offering several degrees of drama and impact, as the stems thicken from regular to black.

Basis Grotesque was originally drawn in a regular weight for the redesign of the photography magazine Hotshoe. Colophon then developed and released the font, three years later, for commercial use. Intentional skeletal similarity among the weights is balanced by a diverse collection of types, and complemented by monospaced cuts in both regular and bold weights, along with partner italics.

Eksell Display was a unique serif typeface from 1962 from legendary Swedish designer Olle Eksell (1918–2007). The original letterforms were drawn in Olle’s five-meter-square studio in Stockholm, six years after he designed the classic Mazetti eyes. In this version, these letters have been carefully digitised and developed into a family of four optical styles.

Sans-serif font Lars is designed to be impartial and versatile. Featuring a stylistic set of rounded glyphs, a ‘footed’ number, a simplified ampersand, and a case-sensitive feature, this family covers a wide range of languages and provides great legibility.

Anguita Sans Designed by Sofia Mohr for Latinotype. It is a brand-new condensed sans serif family which debuted this October. Founded terminals, a large x-height, and a condensed structure give designers various opportunities to create a good vertical rhythm. This versatile typeface would be especially suitable for titles and short lines of text, in both print and digital media.

Jeko is a re-design version of the Aventa crafted by Ellen Luff. Made up of strong elementary shapes and clean circles, interwoven with modern cuts and sharp edges, it’s bold, refined, and confident. A high X-height and strong capitals provide a high degree of visibility across all weights and have been optically corrected for excellent legibility.

Designed by Enrique Hernández for Latinotype, Goldplay is an evolution of Isidora Sans featuring rounded soft terminals, which give it a friendly and expressive look. At the same time, a large x-height adds a touch of elegance. It is a refreshing combination of modern style and classic proportions that make it a good choice for headlines, logos, books, magazines, and motion graphics.

Jazmín is a more playful and contemporary take on Morris Fuller Benton’s Globe Gothic. Designed by Eli Hernández and published by Latinotype, Jazmín is suitable for use in magazines, short text passages, logos, branding design, packaging design, and advertising.

Inspired by Boston, Breton is a geometric slab serif that’s great for headings and branding design. A diversity of proportions between rounded and non-rounded letters gives text a lively rhythm and a strong sense of personality. Breton was designed by Daniel Hernández and Rodrigo Fuenzalida for Latinotype.

Designed by artist and designer Justin Sloane, Simula is a serif that’s both functional and unexpected in its small details. The result of four years of drawing and redrawing, this mechanical re-interpretation of calligraphic form flouts convention brilliantly and beautifully.

Inspired by the 19th-century revivals of Old Style Romans, Parnaso is a great choice for a display typeface in editorial or advertising work, with its high contrast and sharp details.

IvyMode is a sans-serif typeface developed especially for magazines by Jan Maack. Available in 10 styles. it’s ideally placed for luxury brands and high fashion. With high contrast and flared stroke endings, the family is available in five weights with matching italics.

Garnett designed by Connor Davenport and published through Sharp Type. Inspired by the quirky grotesques of nineteenth-century Britain, and influenced by American Gothic, the family is available in six weights with matching italics.

FS Meridian is on-trend. A geometric grotesque, which takes inspiration from the precise yet imperfect nature of time. This rhythmic typeface boasts a wide monoline appearance, humanistic elements, and extended forms.

Moderat is a geometric sans-serif characterized by low stroke contrast. It is suitable for both body copy and display type, the font consists of 42 styles, ranging from thin to black in three widths (Condensed, Standard, and Extended), with corresponding Italics and six mono styles.

Signika is a gentle sans-serif font suitable where readability is paramount. It features a striking x-height to improve readability over long distances – which also makes it a viable option for non-digital designs.

Oregon is a simple font featuring an attractive vintage style. Its smooth edges are intended to imitate the style of old printing presses. Despite its retro leanings, Oregon looks decidedly modern – it wouldn’t look out of place when used for the logo of a high-end exercise equipment store. However, if you decide to incorporate it into your own designs, we must warn you that it works best when paired with small amounts of text.

These 25 professional fonts are ideal if you’re looking to inject an air of elegance into your designs. They come in all shapes and sizes, so you should have no problem finding one to suit your tastes.

Easy to search anything :WordPress Di...